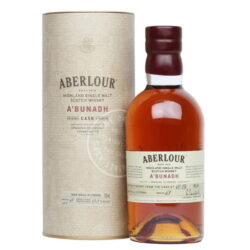 Aberlour is a distillery in the Speyside region of Scotland located in the village of the same name. Meaning “mouth of the chattering burn” in Gaelic, the name Aberlour refers to the stream that provides the ever-important water supply for the distillery.

This water supply, from the flanks of the Ben Rinnes mountain, inspired Aberlour founder James Fleming – who supplied grain to nearby distilleries – to set up his own operation in the late 19th Century.There had been a licensed distillery in Aberlour in the 1820s, but Fleming’s plant is the one that survives today.

The facility he built included a giant waterwheel to power the entire process, which remained in use until the 1960s, though fires in 1879 and 1898 prompted relocations of the actual distillery around the site. Aberlour’s four stills now produce 3,500,000 liters a year.

The house style is regarded as being very low in cereal notes, in favor of blackcurrant fruitiness, toffee notes and a weight which allows liberal aging in Sherry casks..

The portfolio includes Double Cask expressions finished in Sherry casks and aged for 12, 15, 16 and 18 years. There is also a Sherry-cask matured 12 year old, while a’Bunadh is a cask-strength, batch-release expression with no age statement, matured in Oloroso butts. Its heavy, creamy style was inspired by an 1898 bottle from a time capsule discovered in 1975, when new stills were installed.

Pernod Ricard acquired the distillery in 1975 and is managed within their Chivas Brothers subsidiary.