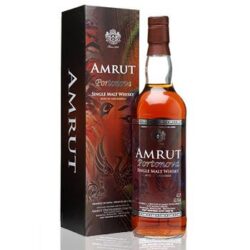 The distillery was established in Bangalore by the Jagdale family in 1948 to manufacture Indian Made Foreign Liquor, mainly Brandy and Rum at that time. However the business soon diversified into nutrition supplements and aquatic infrastructure. It is now a sizeable business of some 1300 employees with 450 in the distillery.

The current main distillery was built in 1987 and the first Single Malt to be made in India was launched in Glasgow at the Café India Restaurant on 24 August 2004. 2010 was their watershed year as not only was their whisky launched in the USA as well as at home in India but Jim Murray rated Fusion as the third best Single Malt in the World.

Amrut, which means Nectar of the Gods or Elixir of Life, is made from barley sourced in the foothills of the Himalayas. The peated barley however is imported from Scotland. Barrels are either American oak or ex Bourbon as well as Rum, Brandy and Sherry casks used for finishing. The Angel’s Share is around 11-12%, hence the average age of the whiskies is 4-5 years old.