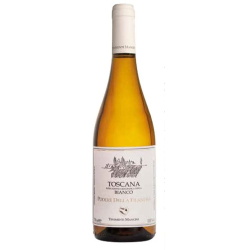 The Mancini family’s winemaking history began at the end of the nineteenth century when the first cellar was built in San Polo, and with the planting of the first vineyards at Podere della Filandra. It continued with the subsequent acquisition of the property at Campriano and, most recently, at Muciafora. Since 1926 the winery has been committed to the production of Chianti doc, using only cement tanks. In the 70’s Amadio Mancini, with his wife Patrizia’s support, took over the winery’s management and immediately began modernizing and improving cultivation and production techniques. These were big growth years thanks to the renewal of the vineyards and the planting of the new olive groves. Today, the winery is managed by Amadio’s daughters, Anastasia, Alessia and Roberta Mancini who, after years at their father’s side, inherited the responsibility perhaps sooner than they would have liked. Thanks to their father’s teachings and his clear directions, they are now able to follow in his footsteps, each in her own way, working toward fulfilling the winery’s objectives.

The wines of the Tenimenti Mancini’s line come from the ancient part of our estate. This area have been separated and far from our management as a consequence of inheritances of the winery and family divisions. But thank to a restored harmony and to the new generation’s spirit of collaboration were born these wines which have very significant names. Podere della Filandra was the name of that part of the estate, as ancient manuscripts say. Amadio is an important name for our family, so our father and our greatgrandfather used to call. He was also called Buccia Nera.

Apply "CNY2022" to get Red Packet Pack. Wishing you a good fortune in the Year of Tiger Dismiss