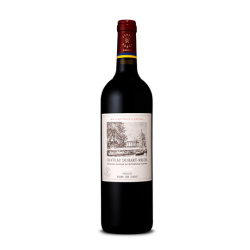 Château Duhart-Milon, previously known as Duhart-Milon-Rothschild, is a winery in the Pauillac appellation of the Médoc, and ranked as a fourth growth in the 1855 Bordeaux Classification. Duhart-Milon is owned by its illustrious neighbor Lafite Rothschild, and shares its vineyard management and winemaking teams. The grand vin is known for its elegance, combined with Paulliac’s typical power.

The single 73-hectare (180-acre) vineyard block is situated just to the west of Lafite Rothschild, facing Lafon-Rochet in Saint-Estèphe. The soils are a mix of fine gravel and sand on limestone, and are planted two-thirds to Cabernet Sauvignon and one-third to Merlot, although the precise proportion of the grand vin blend can vary with each vintage – for example, the 2012 features 53 percent Merlot.

The vat rooms and cellars are located separately in the town of Pauillac. Vinification takes place in vats designated for specific vineyard plots, and the grand vin is aged for up to 18 months in oak. Duhart-Milon produces a second wine called Moulin de Duhart, and in previous vintages an occasional third wine, Baron de Milon, was also released. The château’s average production is around 30,000 cases a year.

The property is said to derive its name from a pirate named Duhart who sailed in the service of Louis XV and retired to the Médoc. The “Pirate’s House” stood by the Gironde until the 1950s, and endures on the château’s label. After the 1855 Classification, the estate underwent a period of decline until it was bought by Baron Eric de Rothschild in 1962. The vineyards had to be replanted, and as a result, wines from the 2000 vintage onwards are generally held to be superior to those of the previous few decades due to the increasing vine age.