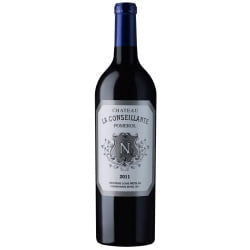 Château La Conseillante is a leading wine estate in the Pomerol district of Bordeaux, known for its Merlot-based grand vin. The vineyard is situated in the east of the appellation on the border with Saint-Émilion and adjoining properties include L’Evangile and Vieux Château Certan in Pomerol, and Cheval Blanc in Saint-Émilion.

The estate is planted on predominantly clay soil and the vineyard consists of 80 percent Merlot, with 20 percent Cabernet Franc in more gravelly areas. The grand vin blend typically reflects these proportions.

La Conseillante has modern winemaking facilities, including a spectacular oval vat hall with new epoxy-lined, temperature-controlled concrete vats varying in size to correspond to plots in the vineyard. Grapes undergo a cold soak for uo to four days, followed by alcoholic fermentation and one or two weeks of maceration. The grand vin is aged in barrel for 18 months on average, with 50-80 percent new oak depending on vintage. Careful racking with bellows pumps and egg white fining allows the wines to be bottled unfiltered. In 2007, the château launched its second wine, Duo de Conseillante, sourced from younger vines, and featuring up 95 percent Merlot. It sees 12 months in French oak barrels (50 percent new) and six months in tank before bottling.

Château La Conseillante dates back to the mid-18th Century, when it was managed by Catherine Conseillan, after whom it was named. It has been owned by the Nicolas family since 1871.