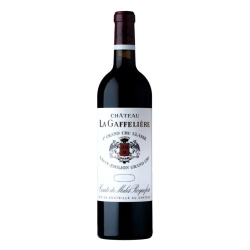 Château La Gaffelière is a Bordeaux wine estate in the appellation of Saint-Émilion. It is ranked as a Premier Grand Cru Classé B, and is one of the oldest family-owned vineyards in the region. Like many of its neighbors, Château La Gaffelière’s wine is Merlot-dominant, with a small proportion of Cabernet Franc.

The estate is located just south of Saint-Émilion town, to the west of Château Pavie. There are around 20 hectares (50 acres) of vineyards, mostly planted to Merlot with a small amount of Cabernet Franc, although recent changes to the vineyard mean the exact proportions could change in the future. In the winery, the grapes are fermented in temperature-controlled stainless steel vats, with malolactic fermentation taking place in barrel. The wine is aged in French oak barrels for up to 20 months.

Château La Gaffelière should not be confused with the adjacent but separately-owned Château Canon La Gaffelière, though both were once part of a larger estate. This was founded on the site of a 17th-Century leper colony – gaffet translates to ‘leper’.

Until 1961, the estate was known as La Gaffelières-Naudes.