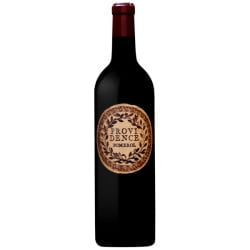 Providence is located in the heart of Pomerol, on the plateau. The estate has a long history in Pomerol with records dating back to at least the late 1800s. At one point in time, the wine was sold under the name of Chateau Trochaud. There are mentions of the wine under the name of La Providence as far back as 1929.

That changed with the 2005 vintage. From that vintage forward, the wine became simply known as Providence. The following year, in 2006, partial replanting of the vineyards took place. Providence started sporting a new label and logo with the 2008 vintage as well.

Things changed after the 2012 vintage, which became the estate’s final vintage. From that date forward, the vines were added to Chateau La Fleur Petrus starting with the difficult 2013 vintage. From 2012 onward, the estate of Providence ceased to exist. The winery is now used to produce the wine of Chateau Hosanna, which is another Pomerol vineyard owned by Ets. Moueix.