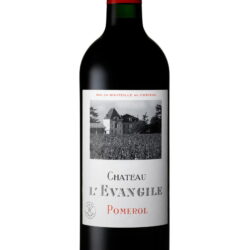 Château l’Évangile is an estate located in the Bordeaux commune of Pomerol, producing a Merlot-dominant wine that is consistently among the most highly rated in the appellation.

The land was purchased by the Léglise family in the 18th Century, changing hands several times before it was purchased in 1990 by Domaines Baron de Rothschild, owner of Château Lafite Rothschild.

Château l’Évangile lies in the eastern part of Pomerol, a little way south of the famed Petrus vineyard. Here, the 22-hectare (55 acre) vineyard is made up of iron-rich clay and gravel soils. This kind of soil is well-suited to Merlot, which makes up the bulk of plantings, with around a fifth of the vineyard dedicated to Cabernet Franc instead.

The vines are harvested by hand and then vinified plot by plot – the vat and cellar rooms were updated in 2004 to help this process. After fermentation, the grand vin is aged in oak for 18 months before release. A second wine, Blason de l’Évangile, uses up grapes that are not deemed high enough quality for the top wine.