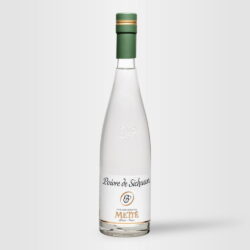 Founded in the 1960’s by Jean-Paul Metté, this small artisanal distillery has since been recognized as one of the world’s best in its field. Joined by his godson Philippe Traber in 1985, Jean-Paul was nicknamed “the Pope of Eau de Vie”. After his retirement in 1997, Philippe and his wife Nathalie have taken over and been perpetuating the tradition of the Eaux de Vie and Liqueurs from the house Metté.