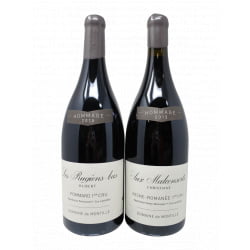 Located in Volnay, just south of Beaune, this winery boasts some of the most prized red wine producing vineyards of the Côte de Beaune. From their holdings in Volnay and Pommard, Hubert and Etienne de Montille (father & son) craft some of the most sought after Pinot Noirs in all of Burgundy. In fact, their wines can be found on the lists of virtually every three star restraurant in France. Etienne took over from his father in the late 1990’s, and is now considered among the elite of Burgundy’s growers. In addition to managing his family estate, in 2001, he was given control of the prestigious Château de Puligny Montrachet with the goal of turning it around to focus on quality. In just a couple of short years, this winery has become one of the top estates in the Côte de Beaune.