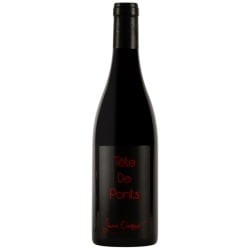 Yann Durieux is one of our favourite up and coming producers who is quickly gaining a lot of attention as a leading natural and biodynamic winemaker. With his long signature dreadlocks and scruffy beard, one can probably be forgiven for mistaking Durieux for a lead singer in a rock band. Guitars and microphones however are not what he prefers holding onto. Vinifying his first solo vintage at just the age of 13, it was clear his real passion lied in winemaking especially in the fascinating terroir in Burgundy. With his decade long experience at Domaine Prieuré-Roch, the young winemaker decided the time was ripe to start his own winery in 2010. Working on a small area just three hectares in size up the hills of the Hautes Cote de Nuits, in Villers-La-Faye, and with DRC as a neighbour, Durieux continued his focus on producing wines as naturally as he could, taking inspiration from Henri Frederic Roch with whom he considered a father figure, and who had also encouraged him to vinify his early vintages in 2008 and 2009 in the domain’s cellars.

Vines average around 50 years old, organic and biodynamically farmed with yields as low as 25 hl/ha are the basic philosophies adopted. As one would expect, the course of vinification runs very naturally too, whole bunches, natural yeast ferments and of course no sulphur. His perfectionist attitude, passion for expressing the terroir as best he can, and also his plain love for nature is all reflected in each bottle that is meticulously vinified, showing the depth of purity, elegance, and freshness he has become known for. If you are a fan of Leroy, Prieure Roch, Pacalet, Leflaive, or even Bernard Van Berg, then Yann Durieux should definitely be on your hit list.

Apply "TMGSPICE" to get Mulled Wine Pack. Be as merry as your mulled wine. Dismiss