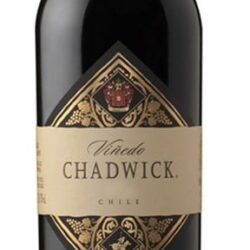 The Viñedo Chadwick wine represents a long-cherished desire of the Chadwick family to honour the memory of the late Don Alfonso Chadwick with an Ultra-Premium Cabernet Sauvignon that showcases the ancestry, tradition, and expertise of the Chadwick-Errázuriz family in producing fine wines and its passion for excellence.

The first vintage of Viñedo Chadwick (1999) was released to great success in 2002, and its second vintage (2000) would later make history.

Although Don Alfonso never saw the finished wine, he is remembered with every bottle of Viñedo Chadwick, named in his honour.

Viñedo Chadwick is located 650 m above sea level in the Alto Maipo, in the southeastern part of Santiago at the foot of the Andes Mountains, along the northern bank of the Maipo River. The 15-hectare vineyard is considered one of Chile’s best terroirs for producing Cabernet Sauvignon of exceptional quality. It has Mediterranean climate with high daytime-night time temperature oscillation, that is one of the main factors responsible for the intense colour of the wines sourced from this zone, alongside alluvial and moderately fertile soils. The cool morning breezes that blow down from the mountains, the placement of the rows, and the moderate daytime temperatures allow the grapes to ripen to perfection while preserving their freshness and acidity.

Eduardo Chadwick’s father, Alfonso Chadwick Errázuriz, was considered a visionary in his time, particularly in the modernization of the Chilean wine industry, what he mainly displayed when he took control in the 1980s of Viña Errázuriz, which was founded by his ancestor Don Maximiano. He established Chile’s first wine brokerage in the early 1930s. And in 1942 he bought the Viña San José de Tocornal estate in the Alto Maipo Valley, where he laid his family home and his own polo field. This, because in addition to his dedication to the business world, Don Alfonso was one of the best polo players in the history of Chile, leading the Chilean National Team for many years, and his team to win 19 open championships, just one shy of the Guinness Record.

Knowing this vineyard had produced excellent red grapes for decades, and foreseeing the potential of this unique terroir, Eduardo convinced his father to convert his beloved polo field into vineyards in 1992. Unfortunately, he passed away one year later. Thus, it is a fitting tribute that the beloved field where he once played polo is now planted to the grapes that go into the wine named in his honour.