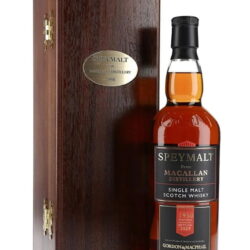 Gordon & MacPhail (G&M), established in 1895, is arguably the most established “Independent Bottlers” that is still owned and operated by the Urquhart family. They boast an extensive range of single malt whiskies available from numerous distilleries – some mothballed, some demolished and of course others still very active. With such formidable relationships that span generations, their whiskies are bought as “new make” spirit and aged in carefully selected casks either in their dunnage warehouse in Elgin or at the distilleries themselves. Unlike some other competitors, they do not buy aged whiskies for rebottling and believe adamantly in perfecting the match between spirit, oak and time.

Speymalt
This range is dedicated to whiskies from the Macallan distillery with whom G&M had a long and fruitful collaboration. Historically they have played the role of a “semi-official” bottler with a selection that some would argue was even more comprehensive than that offered by the distillery itself. It is even rumoured the owners of Macallan have sought to repurchase stock from G&M to supplement some of their rare & old vintages.