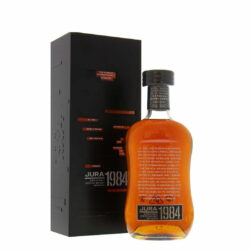 Jura Whisky is a Scottish single malt whisky distillery based on the island of Jura, just north of Islay, in the Inner Hebrides chain of western Scottish Islands.

The distillery was founded in 1962 by local landowners Robin Fletcher and Tony Riley-Smith with the aim of producing lighter whiskies for blending by larger operators such as (at the time) Scottish and Newcastle Breweries. The distillery is now owned by Whyte and Mackay.

Unlike the high number of distilleries on its southern neighbor, Islay, the Isle of Jura distillery is the only whisky producer on the island and (also in contrast to the generally smoky, peaty whiskies of the former) produces a subtle, unpeated single malt in a variety of expressions.