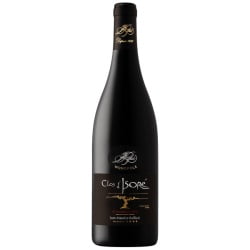 This extraordinary, one-hectare vineyard is a steeply sloped natural amphitheater with limestone soil. It faces south, overlooking the Vienne River, opposite the Chateau de Chinon. Once owned by Rabelais’ descendants, the Clos was highly prized in times past and was regularly mentioned in historical documents. It belonged to the convent of Calvarian and Augustinian nuns from the 17th century through the French Revolution, where it served as a source of income for their hospital – hence its name: the Clos de L’Hospice. Preferring to tend to their vegetables, in 1876 the sisters allowed local Vignerons to maintain the vineyard. The nuns kept the wine in poor vintages for their patients’ consumption at the Hospice and sold off the good years at profit. This arrangement continued until the vineyard was devastated during the Phylloxera epidemic.
Despite various projects, the Clos remained unplanted with vines until 2008. Amazingly enough, up until the 1980s, the land was used as a garden by hospital patients. The hospital relocated in 1980 and sold the land, which enabled the Clos de L’Hospice to once again become a vineyard. In 2008, Rodolphe Raffault revived the site for his Domaine in cooperation with the town of Chinon and an investment group who had undertaken the renovation of the Chateau — itself a national historic monument — along with the construction of new residences at the site of the former convent. Raffault planted 0.65 hectares in the Clos with pre-WWII selection massale Cabernet Franc vines to attain a vineyard that is as close as possible to the original. He will plant the remaining section after the 2013 harvest.
The first harvest took place in 2011, an ideal sunny year with a long growing cycle. Raffault picked the Clos last, on October 5th, two weeks after the harvest of his Les Galuches and several days after the Les Picasses and Clos d’Isore. The grapes were harvested by hand and given a long, one-month maceration period followed by frequent remontages. The 2011 vintage was aged in three, new 500 litre barrels, for 12 months. After the malolactic fermentation in cask finished, Raffault did not add sulfites and also chose not to rack the young wine. Rather, it remained protected under the natural CO2 produced by the malolactic fermentation. Before assemblage in late November 2012, Raffault replaced the CO2 with inert gas to prevent any oxidization. Sulfites were not used during any phase.