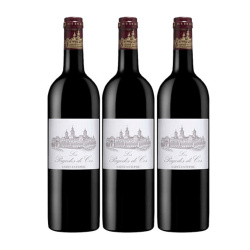 Château Cos d’Estournel produces this 2007 Les Pagodes de Cos , a red wine from the region of Saint-Estèphe that is based on 2007 merlot, cabernet sauvignon and cabernet franc. 4 of 5 points is the average score of this red according to Uvinum users and has also robert parker: 83.

The brilliant 2009 Les Pagodes de Cos actually has more Cabernet Sauvignon in the blend than the grand vin (69% versus 65%) in addition to mostly Merlot and a small quantity of Petit Verdot. As powerful as the Cos in terms of alcoholic clout (14.5%), the full-bodied, round, generous Les Pagodes de Cos exhibits lots of creme de cassis and floral notes intermixed with hints of wood/barrique and spice. Juicy, succulent and remarkably fresh and well-delineated, it merits considerable attention from consumers. It should drink well for 15-20 years. Oddly enough, the second wine is superior to many vintages of Cos in the 1960s 1970s and 1980s!

You can think of this as a scaled-down version of the stunning 2009 Grand Vin. Les Pagodes 2009 is at full-maturity, with smoked blackberries, spice, thyme and wet earthy nuances on the nose. Medium-bodied, soft, polished and silky, with loads of sweet, ripe, red fruits and freshness that glides over your palate. This is fully ready to go. No decanting needed. Just pop, pour and enjoy over the next 2-5 years.