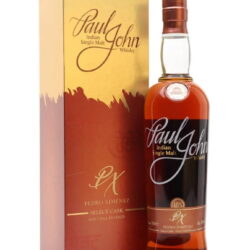 Established in 1996, John Distilleries has grown under the Chairmanship of Paul P. John to become one of India’s largest spirits companies. Based out of Bangalore, they are known for creating the popular “Original Choice blended whisky” before venturing into the premium Single Malt Whisky brand of Paul John which was only launched in 2012 in the United Kingdom that is distilled in the western state of GOA.

They favour a particular strain of barley called six row that is grown in the foothills of the Himalayas, which gives a distinctive smokiness to the whisky and, like other asian malts, the hot and humid climate of Goa has a significant effect on ageing. The peat used for malting the barley in Edited and Bold is from two different areas in Scotland, Islay and Aberdeen. Master distiller Michael D’souza chose to use primarily Indian ingredients in the making of the single malts, to give the whisky characteristics of its country of origin.