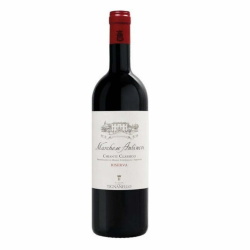 The climate of the 2015 growing season was an extremely regular one and respected in its various phases the typical comportment of Chianti Classico as a territory. A rather cold and dry winter preceded a generally damp springtime in the months of March and April, distinguished by regular temperatures which assisted in a perfect development of the vegetation and optimal phases of both bud break and then bud set. The summer was warm, particularly during July, a month characterized by rather high temperature peaks; the nights, nonetheless, remained cool, favoring the growth of the grape bunches and avoiding any particular problems of stress. The month of August, warm but punctuated by rainfall as well, guaranteed a perfect start of the ripening phase. Picking began during the second half of September during dry and breezy weather.

Villa Antinori Chianti Classico Riserva is ruby red in color. The nose shows intensely fruity notes of ripe cherries, red currants, and wild berry fruit along with well integrated notes of toasted oak and tobacco, and a touch of balsamic sensations. The palate is ample and enveloping, savory, soft in its tannins and velvety in texture. The finish and aftertaste are long and persistent.