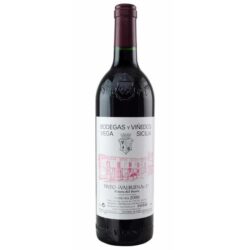 Vega Sicilia fully deserves its reputation as Spain’s most famous and iconic wine producer. The estate was founded in 1864 in Ribera del Duero although the bodega long pre-dates the establishment of the Denominacion de Origin. The original owner planted Cabernet Sauvignon and other Bordeaux varieties along side Tempranillo (known locally as Tinto Fino) and the practice of blending these varieties continues to this day. In 1982 the estate was purchased by the Alvarez family and is currently under the leadership of Pablo Alvarez. There has been a certain refinement of style under Pablo’s regime but the wines remain very true to their tradition and origins.

In 1991 a new winery, Alion, was established in Ribera del Duero, producing wines purely from Tempranillo. This was followed by in 1995 by the Pintia bodega in the Toro region. Subsequently Benjamin de Rothschild and the Álvarez family have set up an ambitious new venture in Rioja which produces wines under the Macan label.