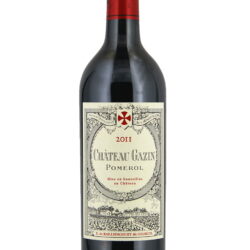 Château Gazin is located on the right bank of the river Gironde in Pomerol, Bordeaux. The wines are focused on Merlot, which dominates the single vineyard plot that makes up the estate. The vineyard neighbors Pomerol powerhouse Petrus, as well as Château l’Evangile, which is owned by Domaines Baron de Rothschild.

The 26-hectare (64-acre) vineyard is planted on one of the highest plateaus in the region. The vines, which are on average 35 years old, are planted on Gunizan gravel topsoils with blue and green clay subsoils interspersed with iron oxide. Merlot flourishes here and the soils drain well, allowing for a good supply of water for the roots. While more than 85 percent of the vineyards are planted to Merlot there are a few rows of Cabernet Franc and Cabernet Sauvignon grown throughout the vineyard.

The vines at Château Gazin are treated with minimal pesticides and organic fertilizers, and once the grapes are ripe they are harvested by hand. Fermentation occurs in small concrete vats in the winery, which is located next to the vineyards. Each variety is kept separate during fermentation and components are only blended together after the process is complete. The blended wines are then aged for 18 months in 50 percent new French barrels before being released. Interestingly, Gazin does not own its own barrels, and instead leases them on a yearly basis.

Château Gazin was acquired by Louis Soualle, a French wine merchant, in the early 20th century. Soualle’s daughter married Edouard de Bailliencourt, who came from a family descended from the Lords of Landas. Today the château is still run by the same Bailliencourt family. It was built on a site that originally housed a hospital that cared for injured pilgrims walking along the Santiago de Compostela route from Spain. The second wine of Gazin, L’Hospitalet de Gazin, is named in homage to this historical hospital, and was created in 1986.

//The 2014 Gazin was stubborn and broody when tasted in bottle, but give it a few swirls and there comes forth gravel and black truffle scents alongside sultry black fruit. These aromatics are so engaging and involving, drawing you in towards it charms. The palate is medium-bodied with fine tannin, crisp and taut with great precision and sappiness towards the focused, almost symmetrical, black truffle-laced finish. This continues Gazin’s fine run of form, a great Pomerol from an estate predisposed these days to create sophisticated, classic wines. //

//Expressive, fresh and forward with a core of black raspberries, flowers and cocoa, this round textured wine showcases dusty tannins in its earthy, fruity finish. //